I was recently commissioned to design and make a stained glass window depicting Santa Rosalia for a cemetery chapel, in memory of a girl who had died at a young age.
The brief stated that the window had to draw inspiration from the famous painting by Giuseppe Velasquez, an XVIII century oval of Santa Rosalia preserved in the Cathedral of Palermo in Italy.

This stained glass window depicting Santa Rosalia could not be an identical copy of the original painting, to start with the painting is oval and the window is arch shaped and the client requested that the dress colour be changed and for St. Rosalia’s face and figure to be made less full, as the concepts feminine beauty have changed a little since the 18th Century. Later it was decided to add the inscription “Santa Rosalia” to the panel.

The cult of Santa Rosalia is very much alive in Palermo, where it is believed that the Saint saved the city from the Plague.
Rosalia was born in the Sicilian city of Palermo in 1128 to a noble family. It is said that an angel appeared to her mother and announced that a rose without thorns was about to be born to her family, hence the child was named Rosalie.
Rosalia lived a luxurious childhood in the court of King Ruggero. He wanted Rosalia to be married off at a young age to Count Baldovino. The young girl refused presenting herself with her hair cut short and announcing her decision to devote herself to Christ .
Rosalia’s decision displeased her family and the young girl was forced first to take refuge in a convent, and later she had to hide in caves around Palermo’s countryside.
This stained-glass window depicting Santa Rosalia is made with a mixture of industrial and mouth blown glass, painted with reddish glass paint and transparent enamels. It was assemble using three-millimetre lead. 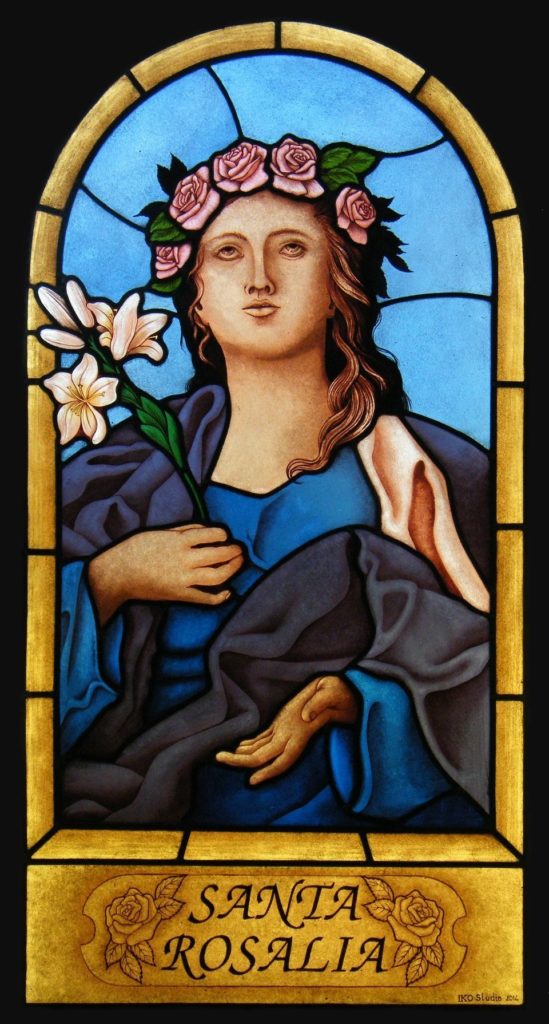