Scholastica was likely the twin sister of Benedict of Norcia. Born in Norcia around 480 AD, her father was from an ancient Roman family of senators and he was the Roman Captain of the region of Norcia. Scholastica’s mother, the Countess of Norcia, died immediately after giving birth to twins. Her father, dedicated himself to raising the two children and they were destined to a monastic life. At the age of 12, she was sent sent to Rome, along with her brother, to complete their classical studies. Troubled by the desolate life he was following, Benedict decided to to follow the life of a hermit. Scholastica remained the family’s sole heir, but she refused every attachment to worldly goods and asked her father if she could dedicate her life to religion in a convent close to Norcia. The farther, deeply upset by the separation from his daughter, accepted her decision and gave his permission. Several years later her bother following in her footsteps, began life as a monk in the monastery of Subiaco. When Benedict founded the monastery of Montecassion, Scholastica followed him and created the first female branch of the Benedictine order, 7km from Monteacssion.

The brother and sister met once a year in a house half way between the monastery and the abbey and it is said that Benedict learned of the death of his sister, three days after their last meeting, from a divine sign when he saw a white dove fly into the sky.

Saint Scholastica Stained Glass window is dedicated to the memory of Sister Giovanna, Mother Superior of the Abby of Saints Benedict and Scholastica of Fano. This beautiful abbey comprises of a 19th Century building which was once the Bishop’s summer villa. The convent’s chapel is the most recent construction. Along with the noteworthy century old olive groves, the whole complex sits within fields and rolling green hills of the Marche region. 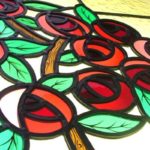