The Stained glass in Todi is in a terrible state of poor conservation, particularly that of the church of Saint Fortunato. In the state of Italy “fortunato” translates as fortunate, but clearly this is an unfortunate state of affairs. 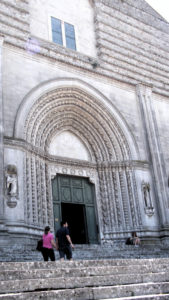 It was during one of my recent intensive stained glass courses that I made a visit to Todi with a student. Todi is a jewel in Umbria’s crown, a beautiful picture-postcard, hilltop town which still retains its medieval charm. Perched on an Umbrian hill, it has magnificent views and is only about forty-five minutes from Orvieto. But despite all its beauty, it was with regret that I noticed that the windows of its church, built before the twelfth century, had fallen in to disrepair and were in very poor condition indeed. Although the roof above the nave is clearly leaking, Saint Fortunato’s stained glass windows left me teary eyed. The windows were made with mouth blown glass, but their past glory was spoiled with cracked pieces, damaged lead work and in some windows pieces of glass were missing all together.
As I turned into the apse, I was saddened to see that the antique bullseye glass to the left was fractured and the central area, which had once been decorated with refined glass painting, was missing a large section, leaving the interior of the church exposed to bad weather, which unfortunately as Umbria’s recent floods bear witness to, is not something that can be ignored. 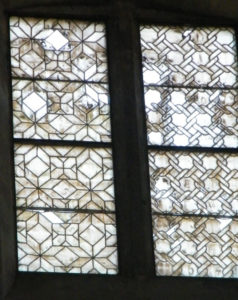 I have no idea who is responsible for maintaining the church of Saint Fortunato in Todi, but I do know that urgent action is needed, to preserve this part of Umbria’s heritage. I was deeply sorry to note that no petition or collection was being made to save this important building and life was continuing as normal. So. on my return, I wrote a letter to the town’s mayor, but did not receive a reply. 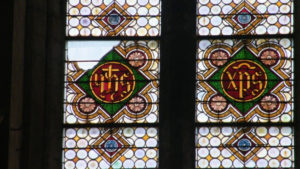