The History of Stained Glass 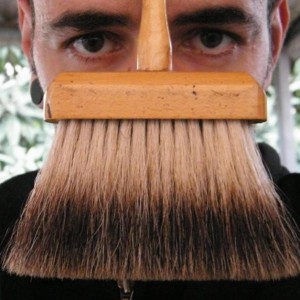 Glassy rocks such as Obsidian were used during pre-history and were often collected from volcanic areas and sometimes a good distance away. They could be split and the sharp edges were used for the first hunting and construction tools, as well as for weapons.

The production of glass began in the third millennium BC, when molten glass was poured into moulds  It wasn’t until the Byzantine era, that the technique of  blowing glass was used. This enabled glass to be used for vials, jars and lids.

The first time glass was used for windows, that is to close openings in a building and still permit light to enter, was not until the Romans era. Then it was poured into moulds making thin tiles, which were then embedded in a wooden or stone frames.

The birth of the stained glass

From the first century AD, lead began to replace the wooden and stone frames that held the glass in place. Because of its malleability, lead could be used to make a more subtle frame.

From the V century onwards, (the Basilica of Maccabees, in Lyon), stained glass began to take on a narrative function for religious scriptures, bringing their message to a mostly illiterate population. 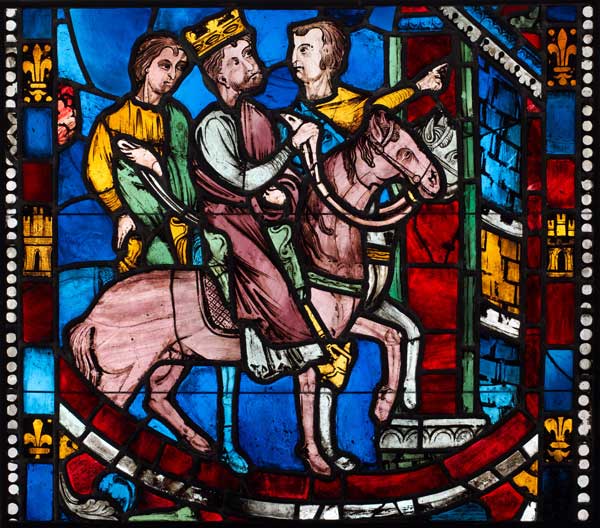 Stained Glass through the Middle Ages

Stained glass use continued to expand, through the Middle Ages, especially for the decoration of churches and basilicas. It became considered as divine: to turning towards the heavens and look at God.

This technique continued to be developed up until the XIII Century AD, at which point stained glass began to show its great capacity for expression. The first examples of stained glass we have were thanks to the work of archaeologists. The head of Christ was found in the 1930s, in the Lorsch Abby and dates from the the IX Century.

From the XII Century windows got bigger as cathedrals, such as Chatre, with its famous windows dating from 1140, begin to be constructed in Europe.

At this time the windows had a totally narrative function and were composed of a multitude of individual images that told of the life of Christ, or a story from the scriptures and they were surrounded by a decorative frame. This model would last for more than a century.

Many of the examples of medieval stained glass have not managed to maintain their original appearance. There is often some deterioration to the glass, due to weather damage and poor restoration in later centuries.

It was during this period that stained glass began to loose its rectangular shape and take on the many forms that are dictated by Gothic architecture, rose window and accentuated arches, composed of small windows of various shapes.

It was also during this period  that one of the largest collections of stained glass windows was constructed, those at Sainte Chapelle – built to house the relics of the Passion of Christ.

Fragments that make up a saint’s head found in the Lorsch abbey, the first example of grisaille painting

Discover the work of Iko Studio in the restoration and conservation of stained glass windows.

even if less transparent than the glass itself, the enamels allowed for the application of more colors

The use of stained glass continued to expand and the style of stained glass began to move closer to that of painting on walls and canvases.  It was the first time that the glass makers and the many teachers began to come out of anonymity, and were recognised as artists. These artists offered their services to the royal courts and because of this we have documentary evidence of their names and works. There were artistic exchanges and ideas and techniques spread amongst artists in Europe. With advent of Van Eyck, painting on glass began to be influenced by the Flemish style, with the compositions becoming more unified, the colours brightener, and the painting on glass more detailed too.

Meanwhile in Italy, the trends in stained glass styles follows that of the early Renaissance Masters, and artists were often called upon to create stained glass designs.

In the XVI Century, the evolution of stained glass art stopped abruptly due to a profound religious crisis that rocked northern Europe, particularly England. The Protestant Reformation saw a large number of medieval windows destroyed at the hands of the Government. We also began to see stained glass, which had previously been regarded as a strictly religious art-form, appear in stately homes and government buildings. Heraldry was a common subject.

There were some technological advances too, diamonds began to replace the red-hot iron for glass cutting, new oxides were discovered that when applied to the glass changed its colour and new pigments for painting on glass were found and transparent glazes began to be used that gave the artist the possibility to apply different colours to the glass.

Having been abandoned due to religious wars in Northern Europe and the French Revolution, the IX Century sees a renewed interest in the stained glass movement.

The Gothic style, favoured by architects such as Pugin became popular and studios such as Hardman and Co, began designing windows. A few years after this revival, the English studio Morris and Co. made an important impact on the stained glass world bring classic styles from the past, but this time at the hand of painter Edward Burne Jones, who was heavily inspired by the Italian Renaissance, and produced some fantastic works.

This led to new influences being able to take hold later. It was also a period of technological advances and the creation of new types of glass becoming available such as opaque glass which used several overlapping layers to produce an opalescent appearance.  In 1893, an exhibition in Chicago launched the Louis Comfort Tiffany style that is credited with bringing landscapes into the window and bringing the stained glass into everyday objects, such as the famous Tiffany lamps.

During the Second World War, a large amount of medieval stained glass and glass of special importance was removed from buildings and put into safe storage, but most of the pieces that remained in place were destroyed by the bombings and were later replaced with modern windows.

At this time the window begins to enter into a new experimental phase and at the end of the 1950s, Matisse is tasked with the creation of windows for a monastic chapel in Vence (France). Its windows were inspired by his paintings: simple painting, simple shapes and bright colours.

artist and designer, famous for his Nouveau style of stained glass and lamps 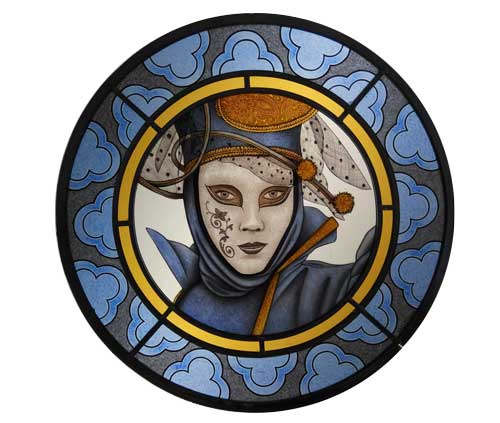 Stained Glass has, in recent years, undergone yet another renewal. All the rules have been pushed aside and glass has come to be seen as a great light filter, softening and colouring it with pigments achievable only through modern chemistry. Glass has been inserted organically in to contemporary and modern buildings, including public buildings, where the steel and reinforced concrete supporting structures leave large voids to be filled with tinted glass.

In cases like this the glass becomes a link between the building’s interior and exterior. Opening the door for abstract forms and new painting effects that have no relation to the styles described above.

One noteworthy, contemporary stained glass artist is the American Ed Carpenter. He has revolutionised the art of stained glass and his works have a powerful visual impact. The circuitry designs, often resembling computers, no longer give a passive role to the sun’s light, instead the glass acts a prism casting unexpected patterns and reflections on the floor and walls surrounding the window.

The English artist, Brian Clarke, with his repeated geometric shapes and random bright colours is also of note. Among his most important works are the canopy of the Victoria  Quarter in Leeds (England), more than seven hundred square metres divided in to squares and irregular shapes, have their lines broken by the regular geometry of the glass plates .

I recommend  a visit the museum of stained glass at Ely Cathedral where artists and work are displayed in chronological order and Vitreosity blog which offers excellent articles about contemporary stained glass. 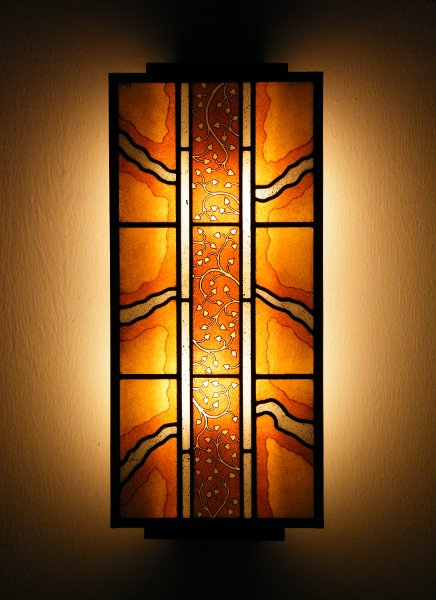 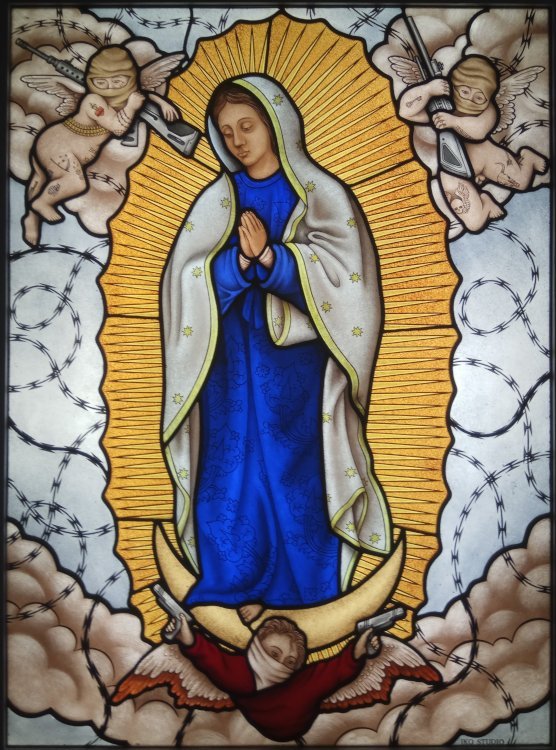 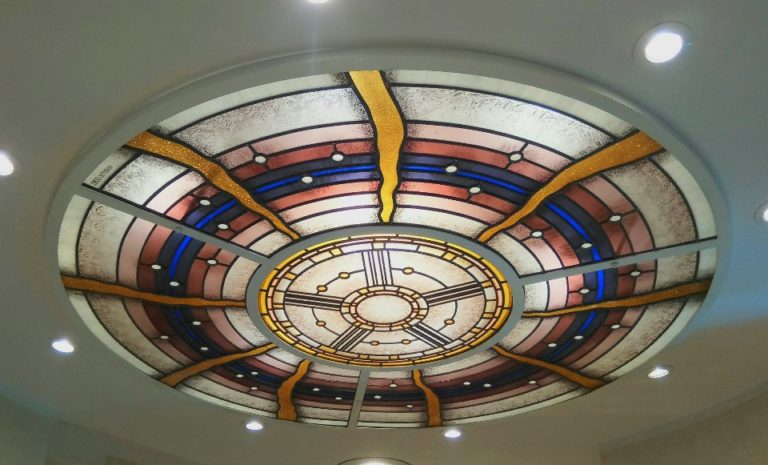 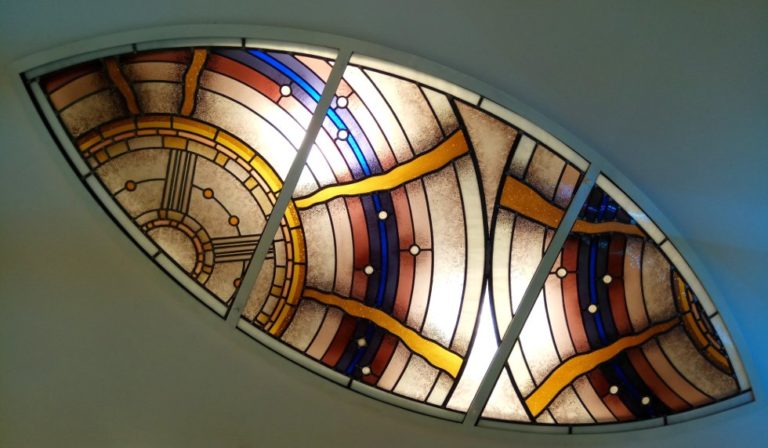 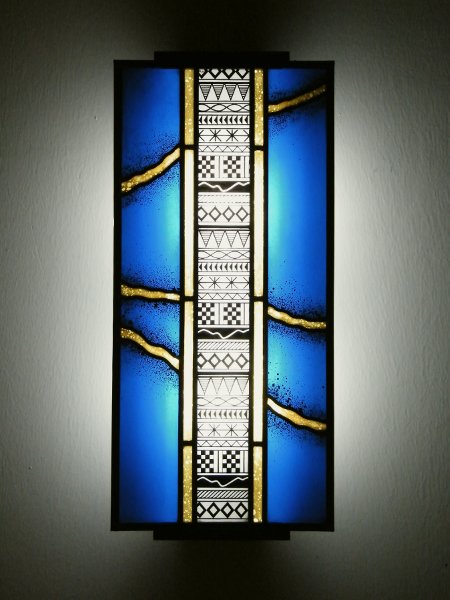 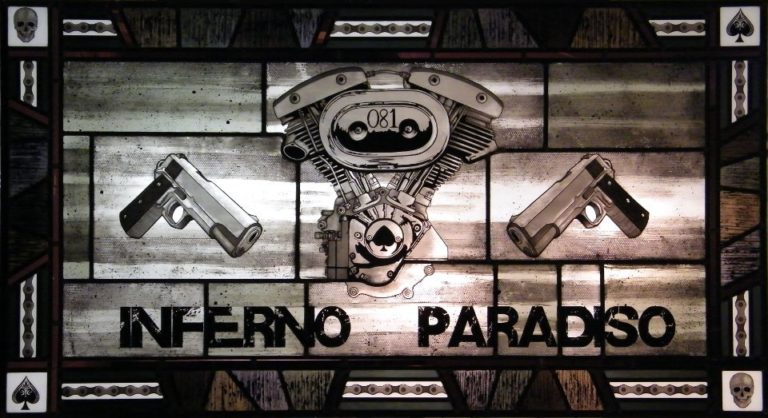 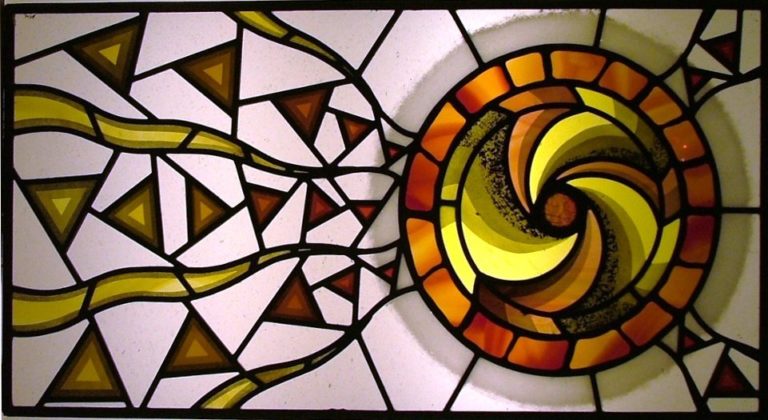 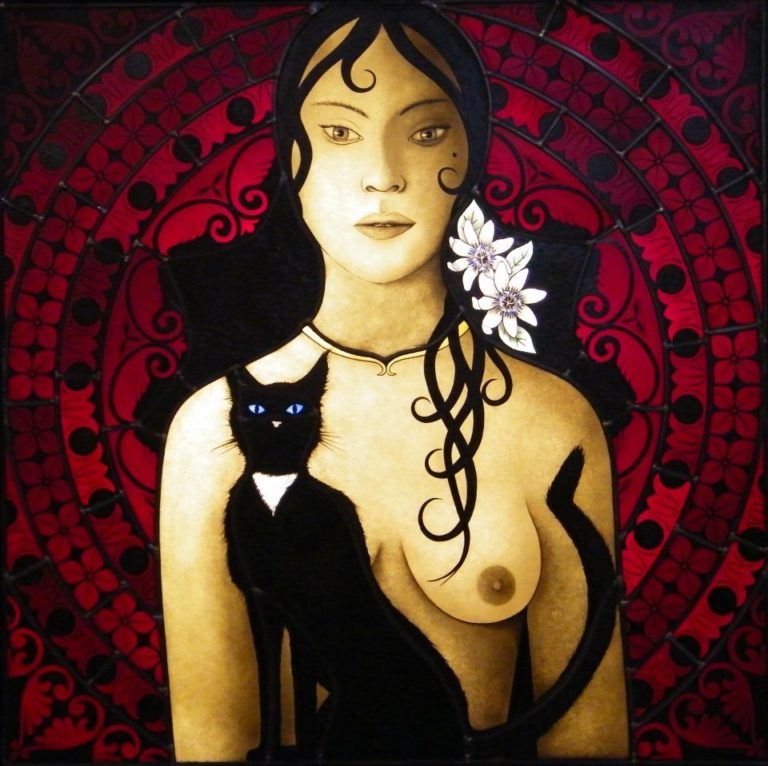 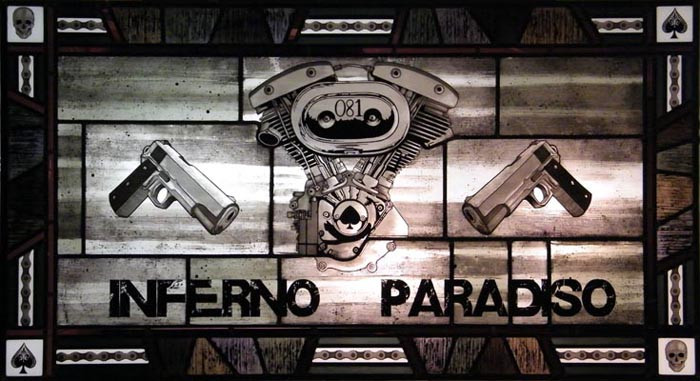 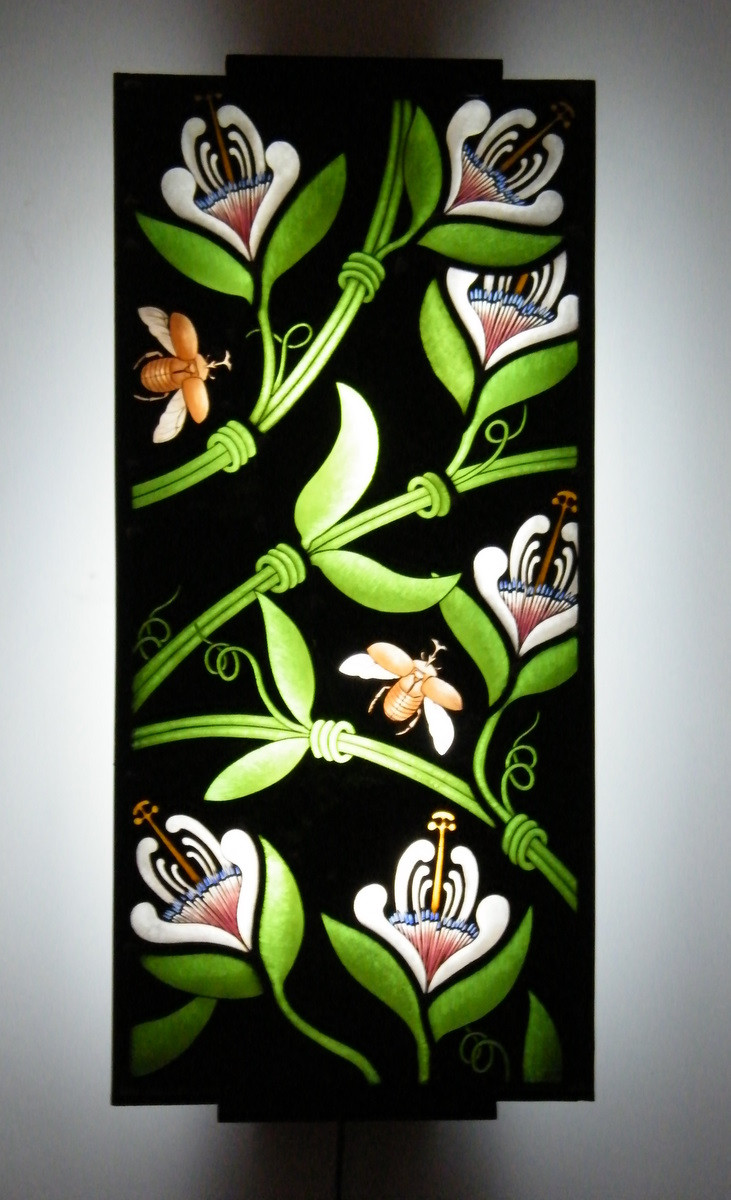