A week-long intensive course in stained glass learning all the skills need to create a painted and enamelled stained glass window.

In North America there is a beautiful bird called the Blue Jay. My student Costanza, travelled from Piacenza armed with a photo of one and a good deal of ambition to create her first ever stained glass window with the Blue Jay as the subject.

As Costanza had never cut, leaded or painted on stained glass before, I was a little apprehensive that it would be somewhat ambitious for her to take this on as her first ever project. But, Costanza is full of motivation and a contagious enthusiasm, and the photo she had brought with her, with a Blue Jay in flight,was so beautiful it was a challenge worth taking on.

We didn’t have time to waste. Costanza immediately set to work drawing an enlarged version of the image to fit the glass. Then, using tracing paper we traced cut lines over the image. Over the next two days Costanza developed considerable familiarity with the glass cutting tools. Her perseverance paid off and by lunch-time of the second day we had time for an inspiration break in the form of a visit to Orvieto to admire the Catherdal, a beautiful building with gorgeous stained-glass, which was set off beautifully with the sunlight streaming through it.

The next stage was the painting. Costanza had had some experience working with water-colours, but soon learned that Grisaglia stained glass paint, being mixed with oils, behaves quite differently. Again, she wasn’t going to be phased by this and gradually, over a few days, she became skilled at painting uniformed lines as well as adding and stripping back shading. I coached her through applying the enamels and the firing process and the finally the painting was finished.

The penultimate day was spent weaving the glass and lead strips together. Her design also called for using some of the thinnest lead on the market, at 2.5mm thick this is a tricky task for a novice, but she did it again. 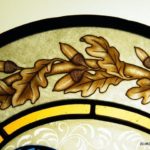 The final day, with the majority of the work having been completed, we could both breath a sigh of relief and have a more relaxing day cementing and cleaning the glass. For lunch we took off on another tirp, this time to the lost city of Bagnio Reggio, which was just stunning in the golden autumn sunshine.

Whilst North America may be home to one of nature’s most beautiful birds, I can confirm that North Italy’s Piacenza is home, not only to a stunning stained glass of the beautiful Blue Jay but also a budding and remarkably talented Stained Glass Artist. Well done Costanza!